Port Sheldon Township hall is an older building and the client wanted it to be updated, remove the fire truck doors, completely remodel the interior and replace its leaking flat roof with a shingled roof. The project was broken into two phases. The first phase included covering the existing flat roof with a gable roof. The challenge in this phase was verifying the existing structural capabilities and designing the structural support for the new roof.

Phase two was total remodeling of the interior including new entry and windows. The existing two truck bays were converted into office, storage and a new large meeting room. Truck doors were replaced with new brick walls and office windows. The entry was rearranged to offer better flow into the office and ease of access to the reception desk which was also included in the remodeling. Meeting room is designed with indirect lighting reflecting off a unique wave concept in ceiling design to distribute the light evenly throughout the space. 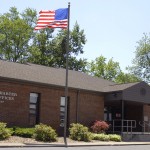 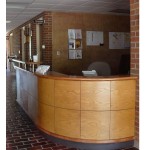